shooting stars at a 'distinctive hotcake'

Susie Bubble geniously hit the nail on the head when she described Distinctive Hotcakes, an item so high in fashion stakes that it quickly sells out, much from the result of fashion forward magazines or the growing influence of catwalk ideas going straight to the high street. Many weekly rags like Look and Heat love to spot celebrities in high street items and maybe we do too; at least then we can get our mitts on them!? But does a celeb spotted thread + Distinctive Hotcake potential = burnt oven gloves? If their own clothing lines aren't enough, one little picture can send an item into outer space never to be seen again. But me in my little flying saucer happened to crash into one!

I think Alexa Chung's funny personality is overshadowed by serious paps of her in more expensive high street items while being hailed as a style icon. I just think if we all had the money of said teen 'fashionistas' such as Peaches Geldof and Kate Nash, who are a bit young for and probably can't really afford a total designer wardrobe, we'd all be able to constantly buy the nicer things on the high street. They possibly just get sent the stuff as soon as it's made anyway for store promotion. Style icon or not, a few months ago after the Chanel SS08 show she was spotted in a 'punk-rock' (*snigger*) Topshop star print dress as Look magazine kindly pointed. They wrongly labelled it £65 which I thought was quite steep but lusted over the fact that it was the closest copy that will probably pop up of the best point of the Chanel show- big stars. But as Susie Bubble told, I knew then that this was an obvious Distinctive Hotcake, as a quick look on the TS website proved as it was Sold Out.

I forgot about the dress until it popped up again on the website about a month ago, every size sold out again. I wish things just disappeared off there once they were, rather than hovering to taunt us!

So it wasn't until today whilst browsing the empty non-sale sections of Topshop 2 minutes after it opened, I spotted a rack of about 15 on a well displayed stand right infront of me. It was one of those shopping moments when you're just hypnotised towards something and I immediately gravitated towards it and snapped one up, despite the pricey £50 price tag. It's shaped a bit like an 80's tea dress, with puffed shoulders and rouching at the waist with a bow either side. Bows- yeah I had to buy it!

I knew I'd stumbled across a Distinctive Hotcake but guessed that TS had finally noticed the demand and widely stocked them. But as I googled images of Alexa in the dress, I noticed auctions selling them for over double the original price! There are about 10 on eBay all gathering high bids.

The Birmingham chain is a flagship 1 store but they've appeared on the website again, all sizes sold out AGAIN. What is happening?! Did I get lucky and the remaining dresses in store were snapped up straight after me this morning? Or will they languish there for a few days as people turn their attentions to the sale racks? I'm a bit wary to buy and sell on eBay for profit as I have no idea which way this DH will go. I'm even a little worried that some fashion forward friends of friends could turn up to a house warming party on Friday in it too!

Anyone who follows runway would immediately label it as a Distinctive Hottie but since SS08 shows haven't been publicised yet, will this be a distant item that may haunt magazine pages. Like Disneyrollergirl has said, magazines don't always show items that shops will actually stock, and you can bet that in a few months you will never be able to achieve 'the Chanel look' because this DH will be long gone... 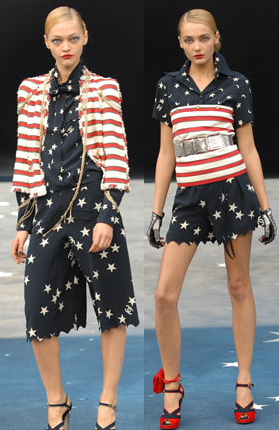