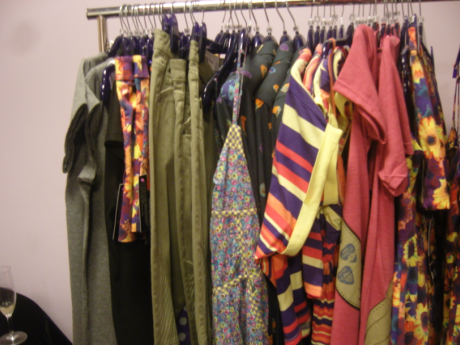 Picture me rushing down crammed Oxford Street on one of the hottest days of the year, hair shoved in what earlier resembled a bun (not a cool Scandinavian top knot but a attempt at any style that satisfied getting hair out of the way), crumpled t-shirt, and makeup, what makeup? That sweated off hours ago! Is this any way to go to a press event? Probably not, but oh well. I don't go to many press things as you know I don't live in London and I'm not quite sure people like to read about them? But I was invited to an event at Debenhams and, as I used to work there aiding the nation's bust, I have a little soft spot for the store. I've just started working in another high street store for the summer and the manager who interviewed me had managed in Debs before and said, 'I know if you can do the lingerie section at Debenhams over Christmas, you can do anything!' But I had been doing all the things that make up an internship during the day of the event and really I have a blog, not a modeling contract! It probably was worse not to have ate since 1pm so by 7 I definitely passed on the champagne! The event was for the current and future H! by Henry Holland collections, where I suppose Debenhams are being quite kind as most other high street x designer collabs have you camping outside the store at 4am. The sad thing is I'm not sure the target market frequents Debenhams as much as Primark or Topshop, and I suppose events like this are meant to change that. My camera wouldn't have made much of a dent so I only snapped one photo, but there were two full racks to browse. It was mostly school inspired stuff like blazers with checked lining, random prints like giraffe leggings, and mismatching patterns like a colourful playsuit. We were kindly told there we could generously take home two things and, like when you have just been paid or have been gifted store vouchers, you have no idea what to choose!

Everyone on earth now seems firmly addicted to maxi dresses and nearly all the bloggers at the event made a beeline for this dress. I have a mental radar warning me automatically against grey as it washes out my skin-tone. As much as I'd love to try grey jersey and studs and ripped tees, it just doesn't suit me. But as time went by chatting to the bloggers there, my future trend radar started warming up and I know khaki is going to be huge in Autumn. Army prints have been popping up in unexpected places and as trends are always in cycles, I'm starting to wish I still had all my Spice Girsl-esque army print stuff from the '90s, especially a mini backpack with one of those push fastenings. The smaller sizes had been snagged but you could put your name down for the next batch, so I've been eagerly awaiting this dress in the post. My house number was a little mixed up on the package but somehow the postman must know what house a Selina lives in; most probably because he has to lug my packages down the road all the time! Sorry Postie! 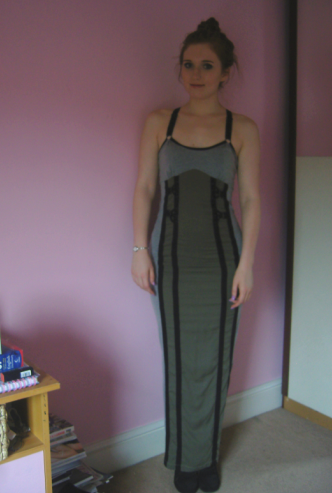 This dress could be quite the miracle dress, but I don't do it justice, I do it too much justice! I'm not tooting my own horn, let me explain. There are definite design skills here because the black vertical seams of the dress as already sewn in a curved shape, and the ties at the waist are adjustable, so it gives you an hourglass automatically. The green section gives the illusion that that's the main silhouette of the front of your body, making you appear slimmer. And somehow it's flattering on my tiny bust as there's the separate grey section, and if you notice it slopes down underneath, creating a fuller illusion, and there are strong-looking straps to make it appear there is something worth supporting! It doesn't attract attention to what's missing and gives a balanced look. Yet some bloggers, after taking one look and saying 'there's no way my boobs will fit in that dress', tried it on and loved it! The straps are adjustable so that might help, but this would also make the dress a bit shorter or longer if needed, and it even has a slit up to just below the knee, letting you move and flash your ankles, oh my!

The problem is this dress is too flattering! I live in the second biggest city in England and I could not walk around in this dress, even in flats. I would not take a photo from the side in the dress as I've said many times, I'm very bootylicious, and the close cut and the lines of this dress enhance that dramatically. I'm already hourglass-y so the dress is less casual and more hello boys. I've had some trouble with maxis so far because the close cut ones suit me the best as fuller ones that hang from the bust would make mine look smaller and make me look bottom heavy, so they have to show my waist but also go back in at the bottom or I'd look like I had a small top half and big bottom half. So I'm afraid even in London, people (well, men) have leaned out cars to make remarks, and especially where I live in Birmingham, aka chav and general 'lad' haven, you generally can't walk around without looks, calls, and comments anyway. I've addressed this before on my blog and at least in London you have the freedom of everyone being super busy and commuting around constantly, so you don't notice one person or spend much time thinking about them as you genuinely pass thousands each day. But when I'm innocently argan oil shopping on my local high street and some guys are waiting at the bus stop (with a pram too!), you're probably one of the very few girls aged between 16 and 25 that they'll see, and if you have something that's unexpected, you are going to hear a purposely loud 'look at the arse' remark.

It's a catch 22 situation that one of your, or at least one of my, natural and enforced daily aims is to be attractive. Not necessarily to every eye or to the 'norm', but I have to satisfy my own degree of attractiveness. I guess everyone has a level when they go out that determines whether they think 'today I feel a bit minging as I crashed at a friends after that 3am take-away' or think 'today I'm wearing my new top and feeling great!'. When I go out [Edit- as in to a club] I do wear body con dresses because I want to attract guys. It gets a bit tiresome if you get those annoying comments in clubs still, or if people take photos of you or literally assault you, which has happened to me because of my derrière, but you can hope for the proportion of people who will say I like her figure, wonder what her personality is like? So my point is, during the daytime I'm not on the pull and despite it being great if people think you look nice, I don't have an interest in attracting any unwanted attention. The solution is to fold the dress up until autumn and wear a thigh skimming jacket, or preferably my Monki hoodie with furry pom pom ties! 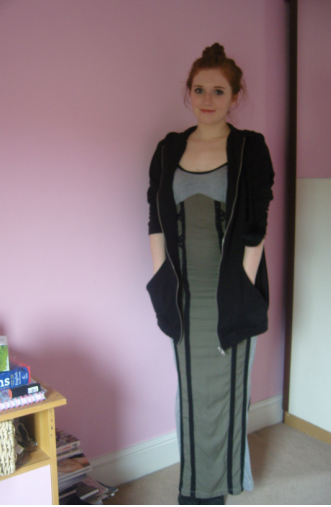 Despite my rant, this dress would be amazing on girls who want to enhance their whole figure, as the dress does wonders on every size it seems. Remember us bloggers are of course real ladies of all shapes and sizes, and I'm guessing at least half walked away from the event with this dress. I was going to exercise my new found sustainable habits and come away with just the one item, but I spotted the dress below and it had my sister's name all over it. Well it has flowers all over it and not 'Chloe', but anything with a bustier top is amazing on her. I took this dress away on the day but it's taken me weeks just to track her down and get a pic as even when I snapped this, her friends were in the garden on pre-lash (read: getting drunk before going out). With siblings aged 19, 17 and 15, my house is like a youth club and I can't even spend a day in my pyjamas on my computer without teenagers raiding the fridge and getting up to no good. I can say this because I'm 21 in a month and officially a grown up, gosh! The maxi dress isn't out yet but this dress has been reduced in the Debenhams sale from £38 to £11.40?! And my sister has a fabulous but balanced figure with one of the largest bra sizes, and she says the cups are fine. Maybe Mr Holland worked his designing tricks with it too? 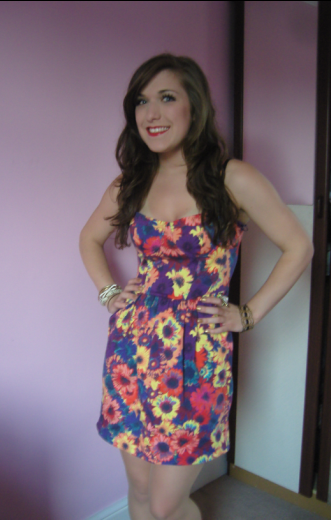 In true blogger style, I must say a shout out and a hiii to the people I met at the event, who were Natalie (and her friend!) from Canned Fashion, Fiona from SOS! Save Our Shoes, Reena from Fashion Daydreams, and then for the first time I met Amy from Wolf Whistle, Carina from Carina 100, Kirsty from Belle Fantaisie, and Dina from She Loves Mixtapes. Dina gave me some lovely feedback on my blog and she looked absolutely divine, the sort of outfit I might have to go up to someone and say wow, you look fantastic!

Also, what do you guys think of blogging about press events? If you don't have a blog but certainly read blogs, do you honestly like to read those posts?