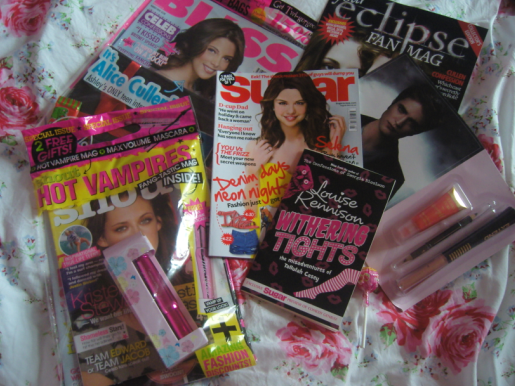 I'm just coming to the end of my diary and will probably hit Paperchase for a new one, but it's still full of random to-do lists with endless ideas. I love lists! Especially when reading magazines and browsing blogs, I always jot down things to look up and find when I've got a spare minute. I might get a Filofax as Gala Darling makes them sound amazing! One thing I've been meaning to do for a while is subscribe to some teen magazines. Maybe before I didn't have the funds to throw on things that I didn't actually need but I don't subscribe to any magazines at all, even if it's better value! I got my Mom a Glamour subscription for Mother's Day so they're sorted when I'm at home but there hasn't been any great freebie subscription gifts with Elle in the past months to persuade me, despite me buying it every month anyway. In fact I'm a bit fed up with the past few issues as they're getting a bit predictable and there's not a huge amount of content? I appreciate the high quality over quantity but I do like magazines like Glamour and Look that keep throwing pieces and articles at you.

But the reason I bought Bliss, Sugar and Shout yesterday was because I'd love to work at a teen magazine, it's my dream job! One reason is because I'm definitely a bit more youthful for my age? I would say young for my age but I don't think you can say that at 20, it's not like I'm going around acting like a 17 year old by partying in parks instead of clubs! But my birthday is right at the end of the school year so I've always been one of the very youngest in the class, and especially when I got to Uni, I realised there are lots of girls who just seem to be a bit more mature? Many people at uni are quite affluent and at 18, a large majority of girls already wore designer makeup and went for cocktails, and probably wouldn't touch my sailor dresses and Hello Kitty swag with a bargepole!

Also I was OBSESSED with magazines when I was a teenager. The internet only really came into homes when I was about 16, so from the age of 11 to 15, magazines were the only source of information and gossip about anything! Other than my five best friends at school and all the other girls in my class, there was no other access to different girls or boys. I'd go home from school, watch teens in Byker Grove or Grange Hill, and that was it. As I went to a girl's school, I didn't know any boys, and developed a crush on all of my friend's brothers at least once! Even shops were simply a sales room of clothes rather than providing the diverse offering that they do now. So in the  early noughties, if you were a young teen, there wasn't a lot on offer! If you had a fashion interest, you could only satisfy it with magazines or books. There's no interaction with teens across the country and the only way I could see what other girl's lives were like and the things they were doing and the problems they had were through magazines! If you are a teen reading this, could you survive if the internet shut down completely? So I devoured magazines and regarded them like bibles each month. If there was a fashion spread, it as your only source of fashion, so I would follow it religiously and know that it was the absolute only fashion out there. You and your friends grow up together so you learn things at the same time, and as I am the oldest of four, I didn't have any older role models. Teen 'zines were my role models! I still can only read 'young adult' books now too because I loaned out almost the whole bookcase in the library over time and really don't like today's adult chick lit, which is always man-obsessed and the characters work in an office. I used to hit the beauty section too, which compromised of some naff DIY beauty recipe books. In fact I just remembered that the library was the only place with internet and I used to go after school and play games! It was the only thing to do online back then.

Everybody in my year at Uni has just graduated, as there are hundreds of girls on my course and in my Uni school, but only about ten did the study abroad year. I d0n't know why so many decide not to go live in another country, no strings attached, but I suppose it's not for everyone. Still you can't ignore all the statistics on graduate jobs and just because you have a degree, it doesn't mean you're qualified. If I'm graduating at the same time with hundreds of girls (and a few guys) next year from my course who are all applying for the same jobs, you have to imagine ways you can offer more. I'd love to work at a teen magazine and it was a teen dream come true when I was featured Bliss magazine last year, but how can I hope to be hired by people if I have nothing to offer apart from a certificate and completed exams? Sure I loved teen magazines and remember all my favourite features and articles, especially since once I'd read the month's issue, I'd have nothing else to read so poured over old issues! But I converted to Glamour and More when I was about 16 and went to college, so I am not clued up on the teen magazine world now. America has Nylon and Teen Vogue, which is a but more fashion based, but British teenagers do not need to aspire to designer clothes because the high street here is amazing! Not that it isn't in America, Forever 21 is coming over here soon! But Topshop set the majority of fashion trends here.

So I picked up the best magazines and studied up! I might subscribe to just one or maybe pick up a couple with the best freebies each month, as you really do get a lot! Sugar comes with a Barry M lipgloss that smells SO good and two liners, and you can eat the lollipop while reading! The only things that have changed are the prices and that all three magazines are much thinner than when I used to buy them. I love the embarrassing moments and real life stories! And of course they are all Twilight, Bieber and Disney OBSESSED!! Luckily my sister is a Twihard fan and has a humongous Edward poster so I can give all the freebies and booklets to her. Don't even ask why she has a mannequin in her room, it was originally for an Art project and is called Pauline as it's from my Nan's friend Pauline, who has a shop called er, Pauline! Now we put her in front of the webcam and go on Chat Roulette, waving her plastic arm haha! 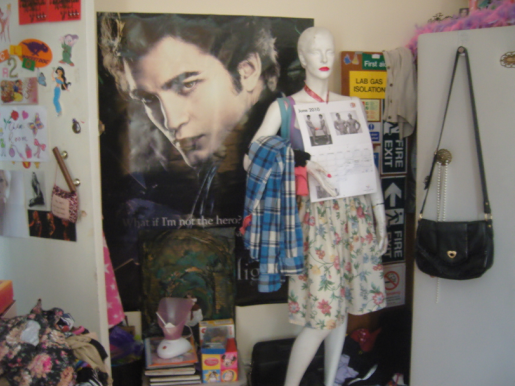 Do you know your dream job? It took me years and years to decide on one thing I'd aspire to do and I get lots of emails from girls who feel confused and crowded by options. Don't worry if you have no idea, take all opportunities given and take the challenging but rewarding road!