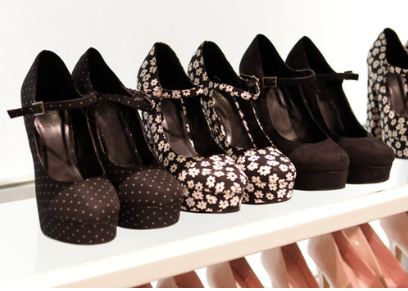 This has been a week of total ups and downs! First I had an assignment due in which meant it was library times from 7am and until midnight and then carrying on for as long as possible at home. One night there was a huge religious thing with boy racers blocking the main roads so I had to walk home and I got horribly harassed all the way! My cat broke the comma and full stop keys on my laptop and when I try to press them, the mouse gets all possessed and goes crazy across the screen, then disappears. So I had to work at the library and the night before the hand-in I had one hours sleep! Because it's final year, I feel like everything can be improved so I researched LOADS and still wasn't happy. And I had to go to work that day too, and the managers weren't happy because lots of things got stolen; gah people are so skanky!! If I'm on the fitting room, then the onus is on me to stop thieves but people are really clever and you don't want to suspect anyone. 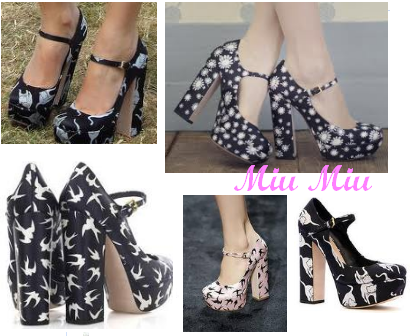 However the week was made right again (even though I have another assignment in this week, argh!) when it ended in a really great night on Friday and my shoes came in time! For the past weeks I have been obsessing with the Forever21 Miu Miu inspired (rip off?) mary janes that came out months ago, but my current going out shoes (the Miss Selfridge bow platforms) are starting to wear out. I find it quite hard to buy heels and will only have one pair at a time as I'd rather spend more on makeup and lashes, and recently my friends and I have been totting up the real cost of a night out. Lashes, new clothes, all the makeup, taxis, pre drinks, hangover food; really the cost is way more than what you actually pay in the club! And what if the night isn't even that good? But I came to the conclusion that the F21 shoes were the most gorgeous shoes just about ever and had high hopes that the new Birmingham store would stock them! I couldn't get down on the opening day but I woke up a few times really early in the morning to refresh the UK website encase it launched. Then I kept ringing the Bullring but they didn't have a number for the actual store yet and the lady started to get kind of annoyed! I even got my Mom to go and they didn't have them, but she did say the store was amazingly merchandised. Finally on Saturday I got through to the store on the phone and a guy said if a line they get in sells out, they don't replenish it. They weren't on the website either so after pondering for weeks, I got an eBay pair! 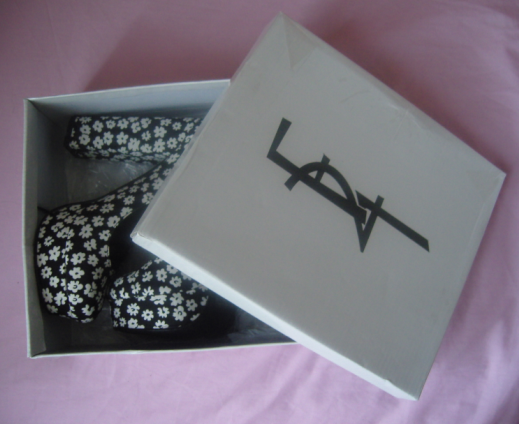 They were way more expensive than the original pair with the postage too and worked out in total at about £70 instead of around $20,  but they're going to be a Christmas present! I bought them on Sunday and with priority postage,  they came on Thursday! That's amazing from America. I'm usually a UK6, but can fit a 5 sometimes, and I got these in a US8 and thankfully they fit perfectly! They're not too narrow at the toes and the strap means the SUPER high heel and platform is easy to walk in without your heel slipping out. They really are very, very high, and the platform is curved so they're really comfy. They do the black pairs but the daisy print were only on eBay and they're my favourite! I have a few patterned dresses that won't really look right with them but I have way more plain black dresses and they're the perfect pattern injection! 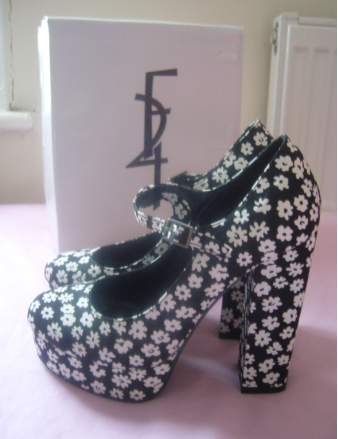 I got mine from this seller  btw so can vouch she's really good, and I bought a shoe protector spray to hopefully keep them shiny and in good condition. They're very sturdy and luckily the pattern will hopefully disguise any scuffs or marks that might occur. Love! 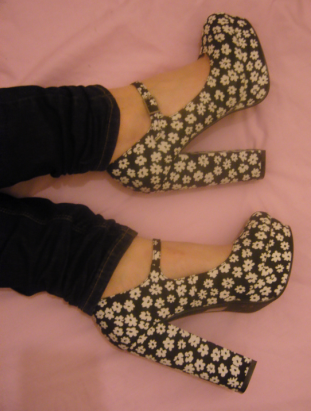 Pics are my own, google image search, and tumblr.