Hola chicas! It's been a looong time since I've checked in so I have a lotta gossip! I am currently holed up in bed signed off work (!) but I'll talk about that later if we go in chronological order. So! The last time we spoke, I was about to jet off to Madrid and it was AH-mazing!!!! Seriously amazing. I've tried to sort some photos that are blog suitable and don't include my friends as I'm not sure they want to be all round the internet (we've all got profesh' jobs now, etc) so here's an extended, huge snap shot:

So we planned on having a midnight nap but inevitably gossiped and chatted until 1.50am when we finally decided to weigh our joint case and found it was way overweight! We started throwing things out so as an already experienced light packer, I only ended up taking one pair of shoes, one jacket, etc. We headed to Stansted and again had to start abandoning things at the airport at the last second as 15kg isn't very much thank you Ryan Air! 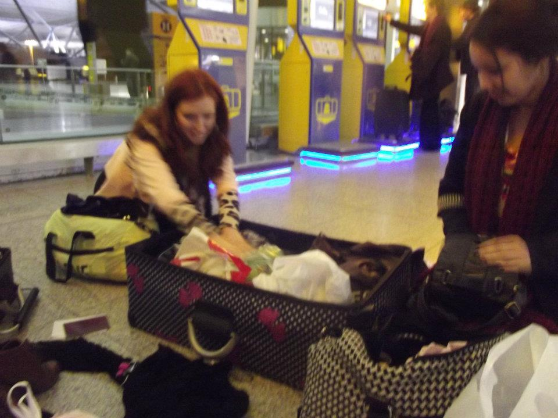 Finally we were off and got to Madrid around 8am, taking the metro to the hostel which seemed to be in a run down, dingy, rainy area just full of main roads. Hmmm. But the hostel was seven floors up a grand building and it seems we were the only people, score! Turns out one of my friends had her purse swiped on the metro unfortunately but luckily we had split our money all around our bags so it wasn't too awful. We headed to the policia to report it and helloooooo the most beautiful police men in existence! We were like giggling school girls, it was excellent! Every cloud, right!

We went to a dodgy cafe and back to the hostel after stocking up on food (and drinks) and started to feel a little uneasy. Before going, I'd printed a description of every single club (planning galore!) so at 10pm we decided to find the club before we got ready (read:drunk) and headed out to somewhere we didn't know. I already knew from my bestie who lived there that in Spain they don't go to clubs until around 1am - 6am so we went for a little walk and found we were actually in an amazing spot! The holiday turned from down to up as we realised we were RIGHT in the centre (2 mins from Sol) and, as it was nearly the Easter weekend, we walked into this very alarming parade: I can assure you it was a Catholic parade and not the KKK, but we had our doubts too! We trekked all round the bars and got very lost and after it seemed like we'd walked forever with everyone staring at us (people stare a LOT in Madrid), we walked past a club called JOY and saw there were dressed up people going in, and my printed description said it was good! So at 11.30pm and finally back to the hostel, we had a nap and a chamomile tea from the complimentary kitchen and got ready at 1am!

A note on the amazing hostel: There is LOADS of availability in Madrid but our hostel was on the 7th floor of the main street with all the shops and theatres, so felt very safe as there were a million doors to get through first. It was only around £15 a night each and we had double beds, a TV, a fridge, two full length mirrors, a balcony, and there were two immaculately clean bathrooms!! The owner was very friendly and we barely saw him, and on the last few nights there were some other guests but they were quiet! We really lucked out, I'd 100% recommend it.

As we got ready (read: drank sangria) we started to feel much better (remember we had barely slept in 48hrs too) and went off to the club! I can't find a good picture of me alone but here is one where you can sort of see my Reverse dress which I found randomly for a tenner on the USC website and seemed to have bought the last one! I like the cut out shoulders and there's a sheer triangle at the sides too which shows your bra but hey ho, that will have to do! 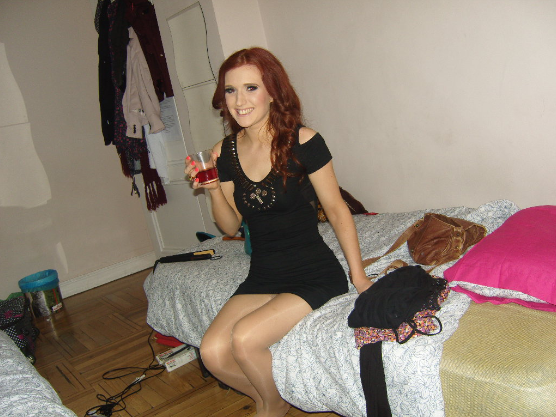 I was slightly concerned that Madrid would be like parts of London, with really posh expensive bars at the centre with generally wealthy, snooty people, but it as like party central! I guess Barcelona is more up market as in Madrid the clubs were packed with people ready for a good time, and by people, I mean men. It was 90%, wall-to-wall guys there and we were swarmed, and this is not a bad thing as they were the most beautiful, gorgeous guys ever, with Spanish accents! As I said, we would walk down the street and people would look at us constantly, maybe because we were wearing generally colourful outfits (most people wore black/grey there) and maybe were speaking English really loudly, so in the clubs guys were all around us, all of the time. I'll spare you any talk of the nights as I think we broke every one of the hostel rules that unfortunately we only discovered on the last day (oopsy), but staying out until 6am is so the way to do it! 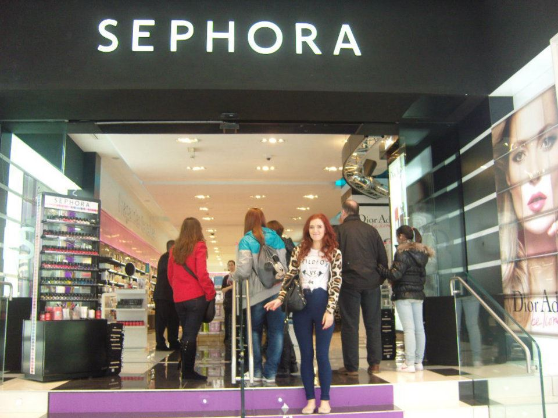 In the day we usually woke up about 3pm, deciphered the night before, and headed off for a light beer (hair of the dog) and a browse around. I was true to my word and made a beeline for Sephora, but ended up buying nothing! I mostly wore my Riding Pants and various tshirts that I could fit in hand luggage - sorted! We were doing the holiday on a shoe string so I did eye up the MUFE Smokey Lash Mascara but it was around 30euros and that didn't seem attractive! 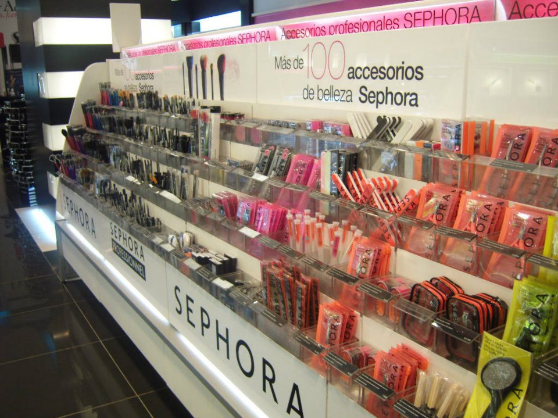 It rained quite a bit on the first day but the sun did come out and we browsed around the theatres, Palace, and other generally grand looking things. Madrid is full of 'street freaks' - as in people dressed up as weird characters and we saw a levitating Jesus which was really freaky, and some seriously scary devils! 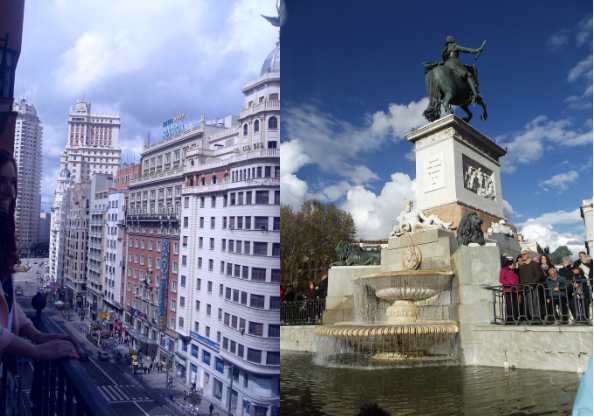 And above on the left is the view from our balcony!! It was quite slanted though so we definitely didn't go out there after a sangria! We kept running into those scary religious parades and promptly avoided them!

We also discovered the shops full of super cute things, all similar to the TRF section of Zara. I should have bought this t-shirt but in Madrid, this rule wasn't hard to follow! On the second night I wore this Motel New Zoe dress in Tropical Butterfly print, which wins the award for prettiest print EVAH! I also prove I cannot look right in blog photos as this posed photo is nothing like any other photos taken! What is wrong with my body/face? Anyway, I think I own about 6 New Zoe dresses now, just search and get your favourite print immediately as it is really the most flattering dress shape and is the classic slightly-pulls-you-in Motel bodycon fabric. That night we went to a converted palace for an international student night and lets just skip the entirety but end on a very funny encounter with a load of band geeks in full uniform with massive instruments in toe! Damn if they would have came to our hostel after parties it would have been great!

On the last night we were really making the most of life and left for the last club at 3.30am! That's the way we roll. We got a taxi to a club that looked like it was closed so headed to Kapital, apparently the biggest club with 7 rooms and everything you could want, including escalators. We ran in, met a very cockney English guy which was a bit surreal, met a professional gambler who bought us all drinks, and carried on the night! Again I will spare you the details and only offer the start of the night when we were respectable human beings. Here is a picture I'm sure my friends can allow; I wore the Motel Leona Dress in the galaxy Speed Print but it wasn't actually bought for the website so you can only find it on Nasty Gal! I bought the sample from our office and wasn't 100% sure I would wear it as I basically wanted it because the original sample was one of a kind, but in the end the purples and pinks are my secret suited colours and I love it on! At MAC makeovers they always put pink and purple eye shadow on me. The photo below was also taken by a crazy lady who was like 'oh my GAWD I lOOOOve you! I lOOOve you!!' and we were like 'umm ok!' 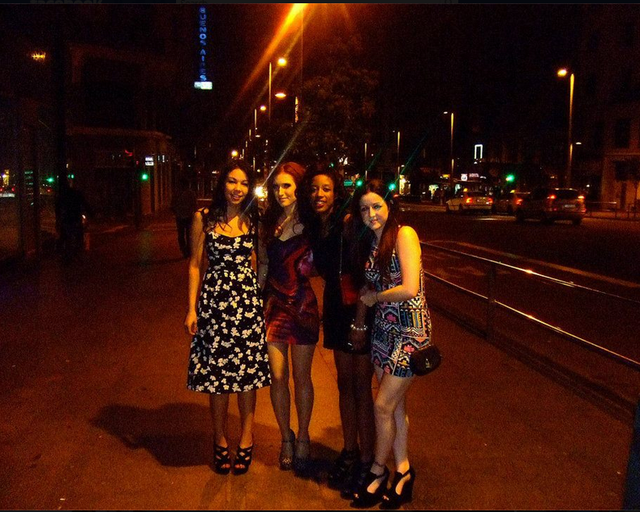 Then the next day we woke up practically in the evening very depressed and made our way back to England, cursing the fact that there are hardly as many tanned, beautiful men and parties all night! I forgot to mention a million McDonalds trips in there and an accidental walk into a brothel that we thought was a pub, but basically that was Madrid! I'm sorry I can't go into full details, just if you're looking for a girlie holiday that's not full of English tourists anyway like certain 18-30 hotspots, go to Madrid! We each only spent about 200euros too and I did use a lot of my GCSE Spanish, but you could get around on just English. OMG take me back pleeeease! Our next stop is going to be Italy hopefully!

As for other things, before my holiday was the Motel S/S12 evening! Again my team of interns and I headed to London to create a girly paradise and there is a great photo of us stealing a Tesco trolley to push down Oxford Street somewhere! You can see all the photos on the Motel Facebook Page, and here's me with a heart balloon (I promise it was!) wearing the New Zoe dress (again!) in the Big Daisy print. LOVE wearing white! I also wore my Litas and H&M matching gold cuffs. In some of the photos I look rather beige but I assure you that was the lighting! 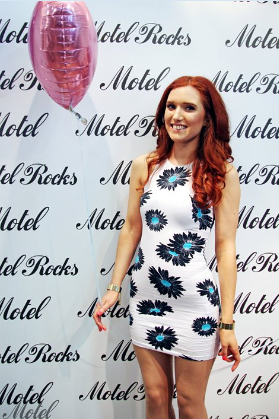 And back to now! Just after I returned from Madrid, I was struck down with a terrible head cold which included many nose bleeds (in meetings too... great...!) and had to have a few days off work, and then my stupid knee decided to suddenly swell up and then REALLY swell up and I had to hit A&E in total agony! I'm waiting on another scan so was given some great pain killers and signed off work for a week, so I've just been sitting here with an ice pack, ice cream, and lots of rubbish movies! I am getting definite cabin fever, hence my happy fingers in typing this epic post. I'll sign off now but I'm thinking I could try to do some outfit posts or make some videos now most of the swelling has gone down, and I did actually wash my hair today after about a week. Until tomorrow! x