The New York Diary - My week in NYC, The Haul 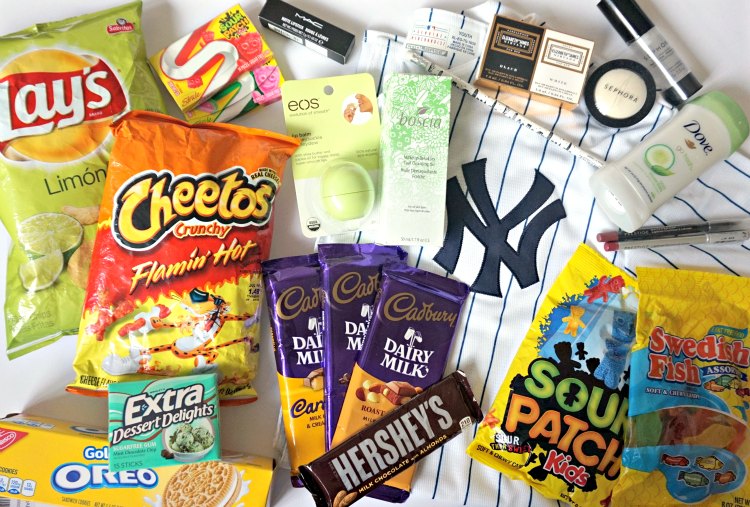 Wah! I don't want to write this post and have side stepped it for the longest time. My New York trip was every dream realised and I can't consider it over, even though it was months ago! I'm still on a high and I find that when I have rare moments of feeling mindful and meditative, I think back to what the holiday signified. It was so fulfilling to reach a goal that had been a lifelong dream and I felt so present throughout the week, drinking in every second.

Lots of people head to New York to shop but there weren't many things I could buy there that I couldn't just get online. Apart from the endless snacks I got for family as gifts and the Hershey-made Cadbury chocolate I picked up for work to try, I couldn't not get a Yankees jersey! If you read my post you'll know that we accidentally walked into a daytime club and met some New Jersey guys who worked on Wall Street. They helped us barter for a jersey, which explains why it's a large youth size haha.

I picked up the EOS lip balm and Dove deodorant because I forgot mine, and the smell reminds me so much of being in NYC that I can't bear to use it up and just creepily sniff it sometimes. I (of course) hit Sephora but nothing took my fancy. I have enough makeup from brands here to need to pick up more, and while being up close to brands and products I've never seen before in the flesh, nothing really caught my eye. I did have a shopping list on my phone collected from various YouTube Sephora hauls before I went, and I made a beeline for the Elizabeth and James mini rollerball perfumes. Sephora has a mini rollerball version of just about every perfume ever, which are SO handy as you don't need to commit to a scent and they also fit sweetly into your handbag. I nearly bought a large size of this Boscia cleanser but I'm glad I didn't as I don't think it does a heavy duty clearance of your makeup and it made a few eyelashes come out.

The Sephora highlighter was a gift for my friend Georgie and the primer was on offer for around $6. The two lip pencils were purchased at Duane Reed on Times Square at around 2am when we didn't get into the club Avenue. I also got a MAC lipstick in Velvet Teddy at JFK on the way home to use up my last dollars!

I have a daily mental checklist where I remind myself of the path I'm on and how I don't have my own place, I'm single, etcetera, but the only thing I'm really afraid of missing the boat on is not travelling to the places on my wishlist before it's too late. I don't mean travelling in the sense of touring, sightseeing or selfies; I mean just being there. Just myself in that moment feeling centred in literally the very centre of where I would choose to be if an instant transporter machine existed. I spend every moment of the day laughing when I go on holiday with my friends but I also love alone time, and my quiet times are just for me, myself & I, plus a whole host of wanderlust.

Which brings me onto my next trip. I get to travel a fair bit because that's literally all I spend my money on. I saved for NYC and I've managed to gather any funds since for a trip to.... Dubai! AND Abu Dhabi! My friend teaches there now and she insisted October/November were the best months to go. Flights weren't any more expensive around the time of the Formula 1 and so we booked it up. Who do I think I am?! Well really anyone can buy a ticket and for the F1, you only need one ticket to access the race course and all of the boats, bars and parties in the hub of the event - plus the after-race concerts in the evening, of which this year are Enrique Inglsias, Florence + the Machine and Blur! That's so insane. The entire weekend was around £100 so half the price of a festival ticket here. Flights were reasonable and we got a bargain 4* hotel for just £30 per night. As I've shown in this post, I don't go on holiday to shop really so I don't need endless spending money!

It does stress me out to think of the huge group we'll be in - nine girls! - so I'm going to do some solo research and be sure I know of all the things I want to do there, and most likely my friends will be up for doing those things too. Then I'll try best to plan all of my outfits and 'looks' as I really like to go to town on holidays and make moodboards of new makeup and hair looks I want to try, taking advantage of being in such a glamourous place. The week before I went to New York I was really ill and it was all I could do to throw my clothes in my case, let alone do a loose assessment of whether anything I had packed matched! Also if I plan in advance, it will be so much easier getting ready when there are nine of us to get out of the door! Literally on holiday we are known for leaving hotels in the middle of the night as we've spent so long getting ready haha! In Europe they don't go out until late but I think Dubai will be more traditional closing times of 2/3am. Who knows!

So if you have any tips or recommendations at all for Abu Dhabi or Dubai, please do let me know! I might see if any of my friends who didn't come on the NYC trip would want to go there next year and then while they're doing the tourist thang, I can go do my own thang! The thought of New York fills me with such an overload of emotion, I can't think of anything else like it! I felt totally at home there yet full of inspiration. Take me back! However now I'm gearing up for the East, I've bought loads of summery things in the sales, and I'm set for the beach! The countdown is on.