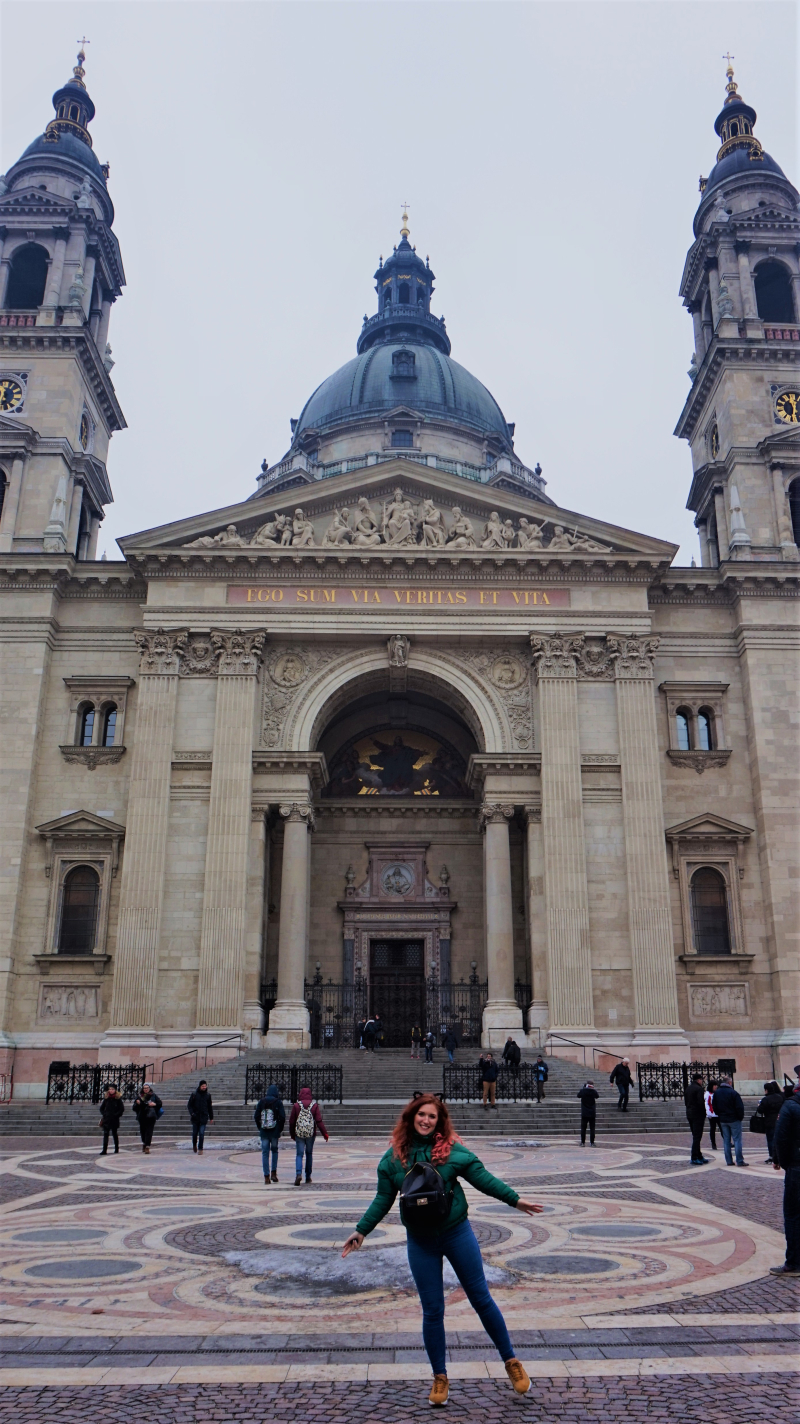 As I said on the 'gram, are you even a tourist if you don't wear your bag to the front?! Onto day two of my Budapest trip and thinking back, we did so much that day! We'd only had a few drinks the night before so we were up and out bright and early for a free walking tour. Our apartment was on the opposite site of the Danube but we swiftly crossed the beautiful bridge and met the walking group, thinking it was a good opportunity to get our bearings and cover lots of sights in one go. One of the best things about Budapest is that there are SO many free sights and experiences, or it's super cheap. It was February so it was damn freezing and we departed with the group to take on St. Stephen's Basilica and the Parliament building. We were paying more attention to taking photos than keeping up with the group though! 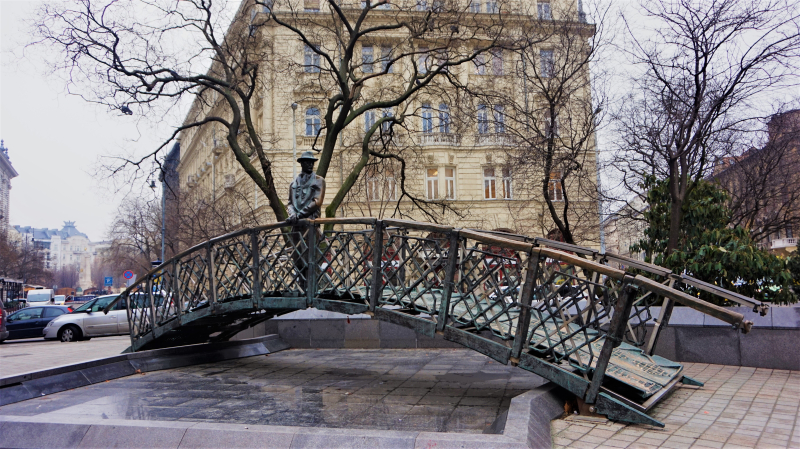 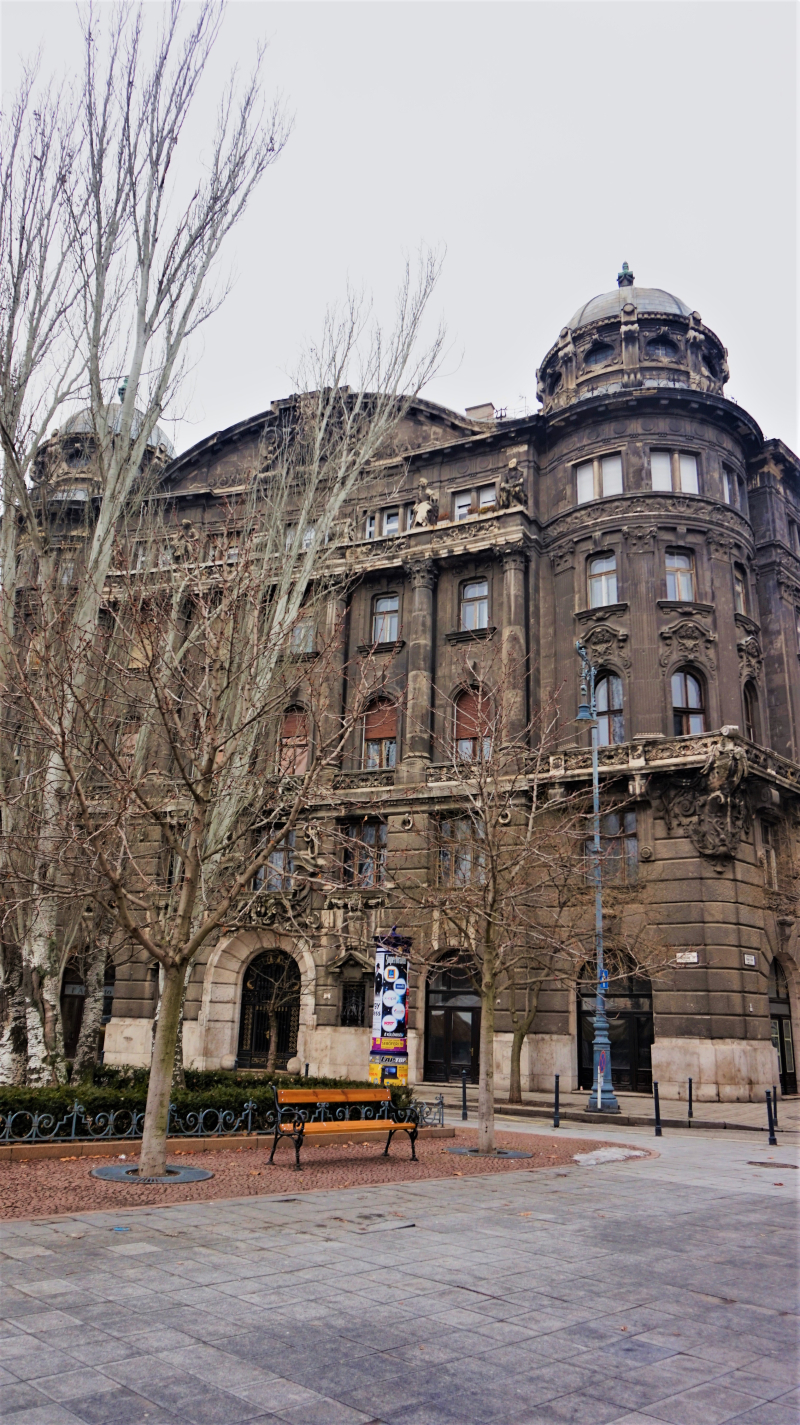 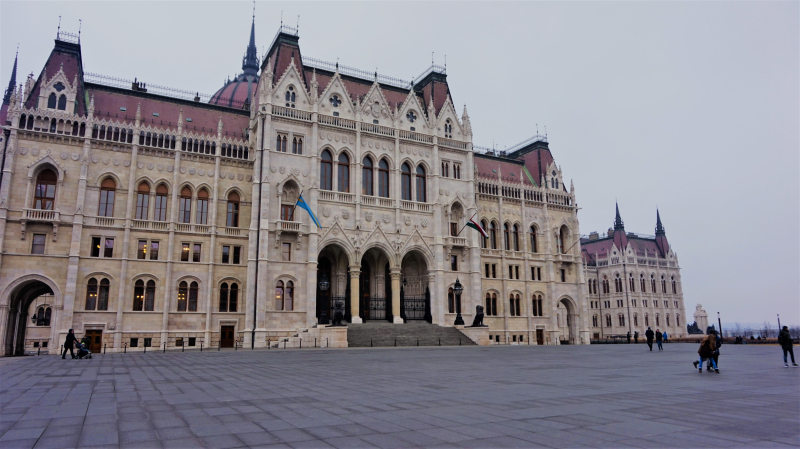 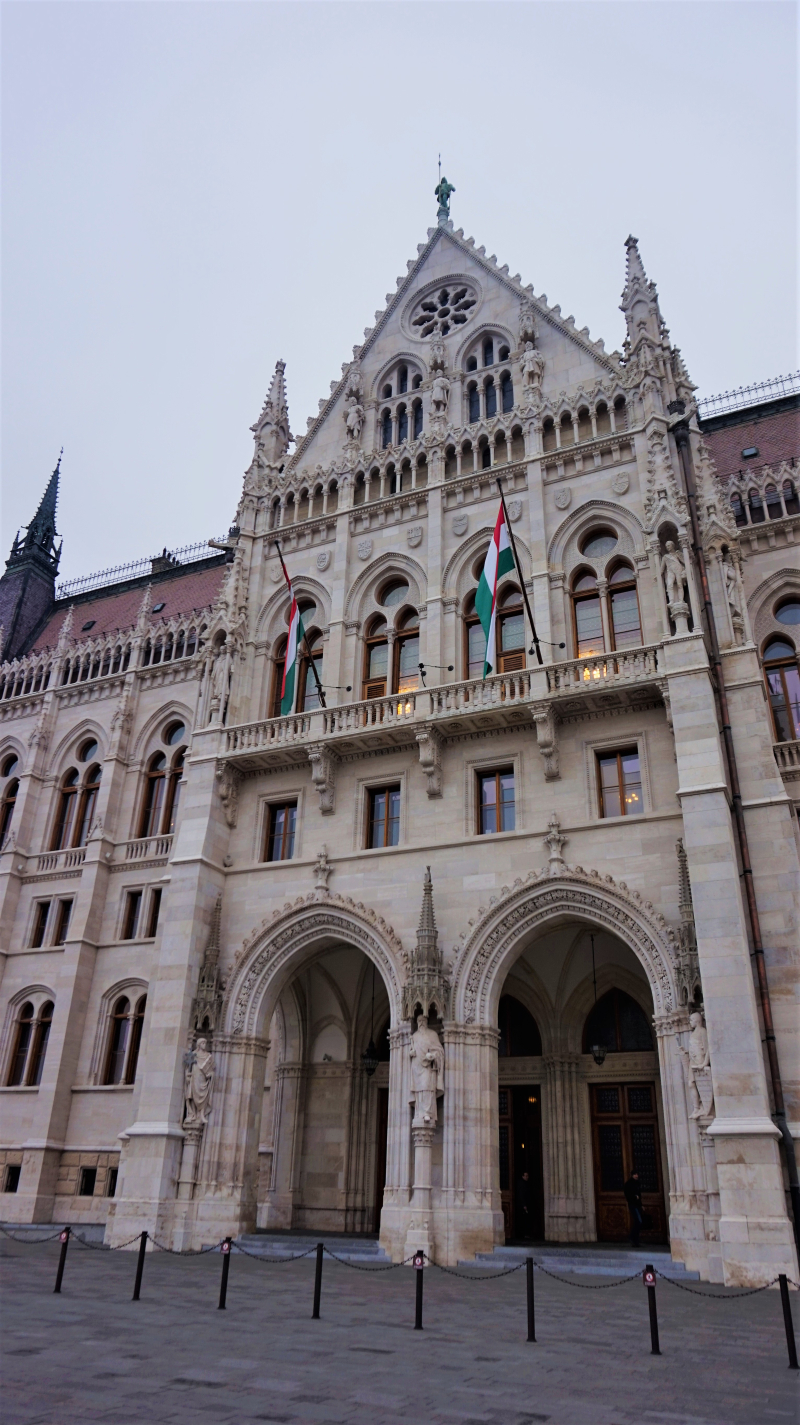 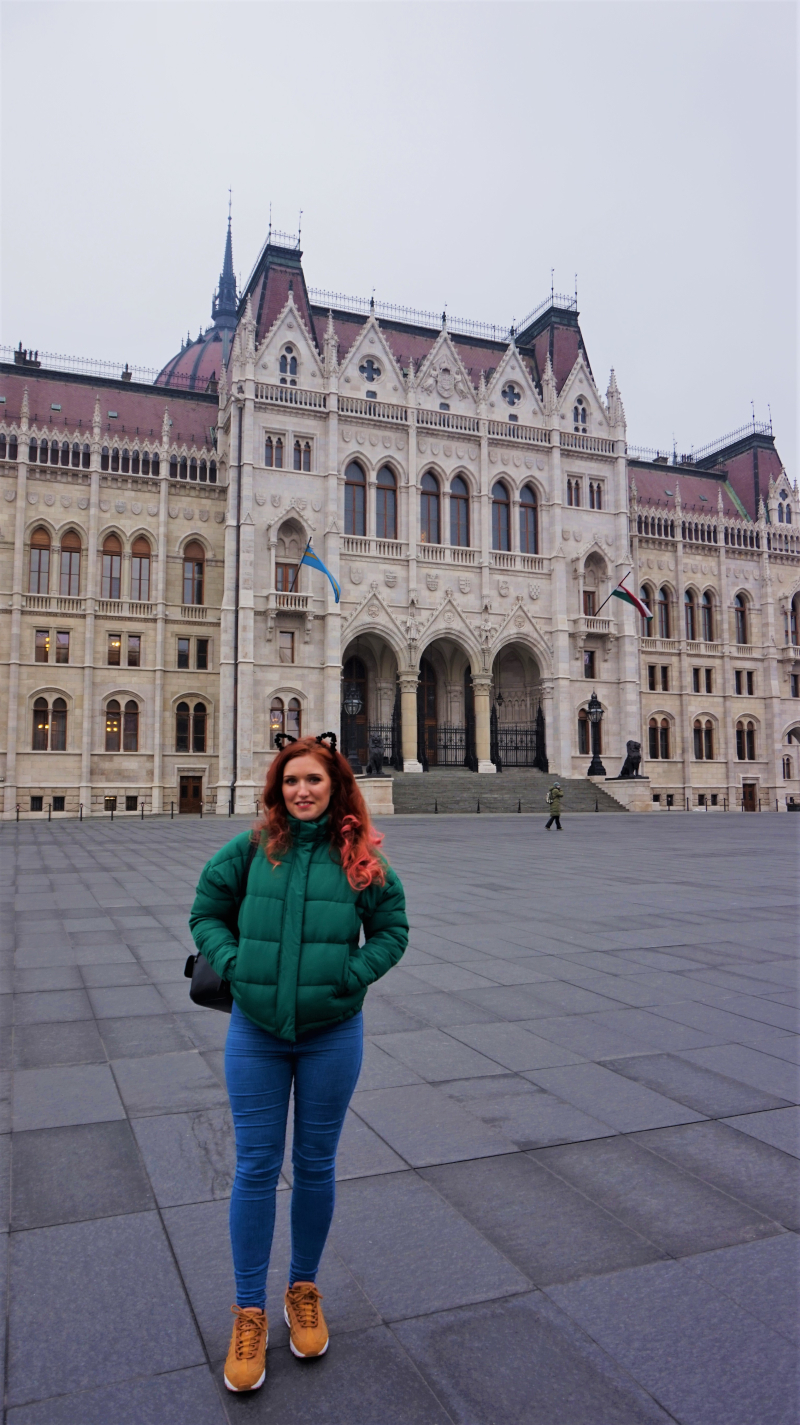 I wasn't sure whether to include a photo of the Shoes on the Danube but you can read about this moving memorial here. Budapest is cloaked in history and this felt open and significant, ready to reflect on without the tourist crowds around you. 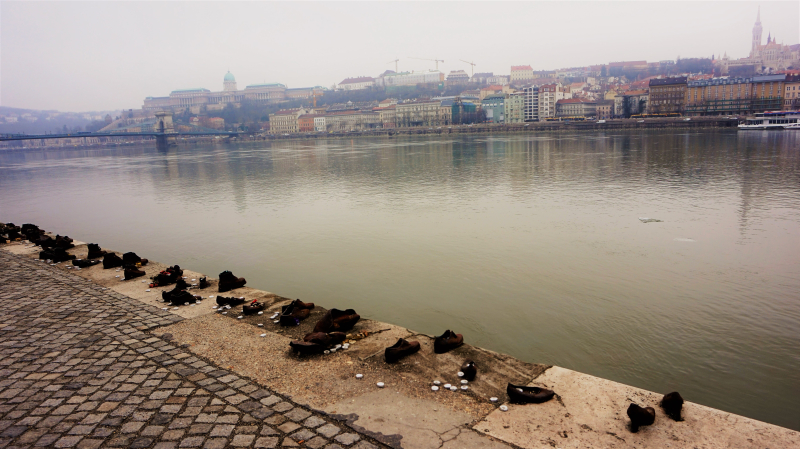 Despite it ending right by our apartment, we actually snuck off from the walking tour pretty soon! I would say you could plan out a tour yourself as the city streets are clear to navigate and sights are close to each other. It was so cold that it wasn't making sense anymore to be pounding the streets so we hung back and slipped away in search of a hot drink. The town wasn't very bustling but this made our search for a coffee shop rather redundant. In the end we grabbed a chai latte in an average Starbucks before moving onto the Terror Haza, a museum set in a place of great horrors of the fascist and communist regimes. The exhibits are hugely varied and use so many different, creative mediums to tell the story of the time, leading up to an eerie walk through the cells that's scary to think about even now. 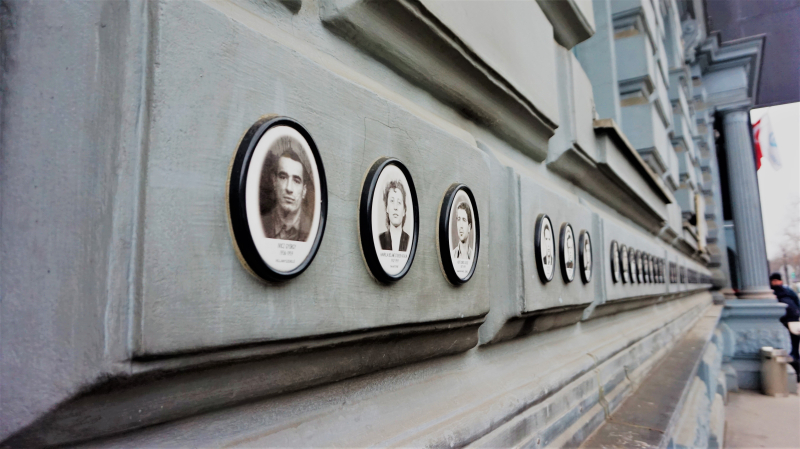 It was time for some fuel and we walked across the city to vegan restaurant Napfenyes to sample giant pizzas. The difference wasn't too obvious but a sprinkle of real cheese wouldn't have gone amiss for me! Dining is so cheap that we could have visited there every day and this cute eatery made for a lovely rest. 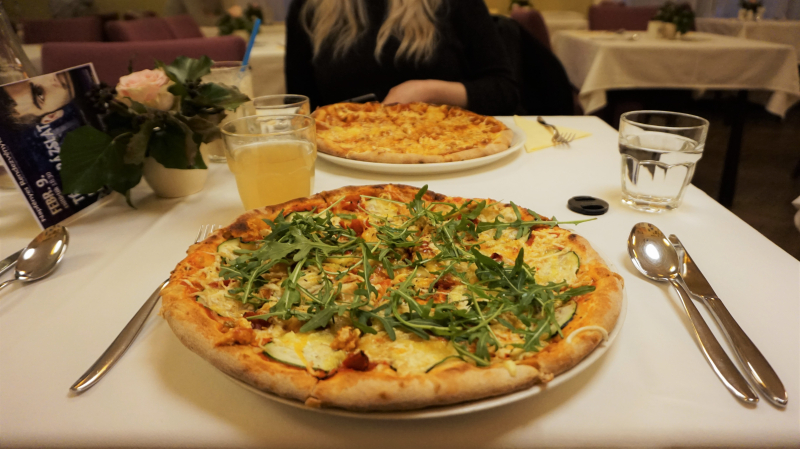 Back to the apartment and onto the night! We joined Tinder purely to ask for local recommendations and made a plan to head towards another ruin pub. The apartment was an absolute delight and we were blasting music, applying piles of makeup and dancing around in pure comfort. This is going to sound ridiculous but half the clothes I brought didn't actually fit! Literally I walked into my friends' room with a dress barely covering my hips, so potentially that winter snacking crept up on me by surprise! Bring it on I say - the only problemo was that I only had limited outfits with me! I'd luckily packed a fair few extras of course. My friend Catherine had packed a set outfit per day but I always find I need so many options to mix and match. I dress on instinct and it strikes fear in my heart to think you might have to wear something that doesn't feel right on the night! 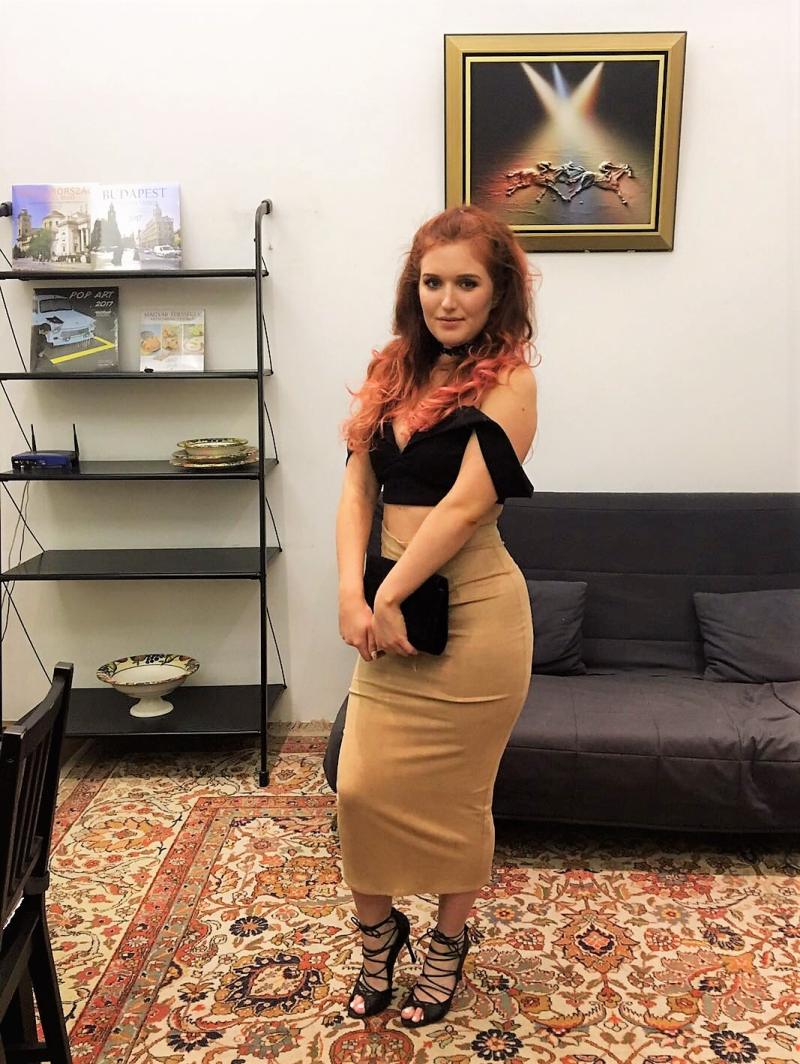 I had this faithful Missguided midi skirt that looks like faux suede but is actually rather stretchy, and a handy Missguided cropped bralette that may seem off-shoulder, but it actually has sweet straps. My hair was damn curly from the day in the freezing weather so I had to tie a little up to appear somewhat less dishevelled! 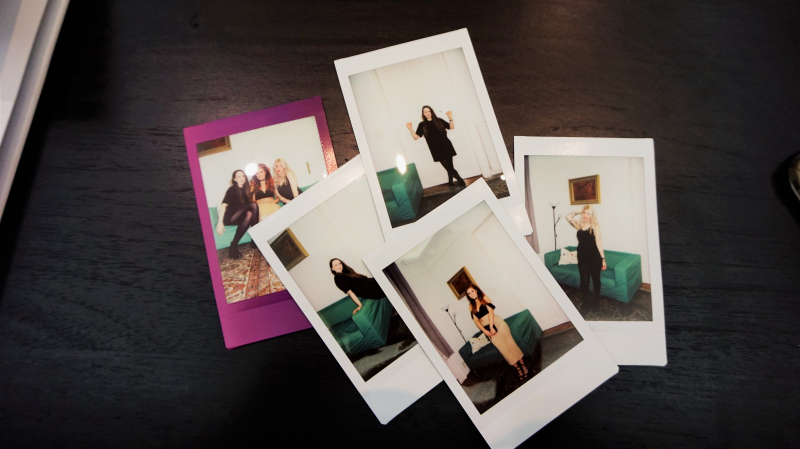 We snapped away on my Instax (the first thing I exclaimed when I saw the size of the apartment was 'this will be amazing for photos!') and had one last drink before heading to the bar. Gozsdu Udvar was an arcade full of cafes and pubs but on a Wednesday it was rather quiet. We dodged a bar with girls dancing on the tables and ducked into Blue Bird Cafe, soon realising... it was karaoke night!! Amazing. I usually hate karaoke but I included Snapchat videos in my vlog below because it was actually completely hilarious. We tapped our request into the iPad (Tribute - Tenacious D) and enjoyed streams of tourists singing everything from Disney songs to Queen in terrible accents, taking it extremely seriously, before complaining our song was taking forever. A traveller told us she had sneakily deleted all of the other requests before hers and that was the only way it played! By now though it was rather late and we just crashed other people's songs! It was such a fun night and didn't matter that we ended up staying in the bar as I've never laughed so much! Look out for my next instalment soon, or check out my vlog below for a sneak peek!