I've actually been quite nervous to post about my solo trip to New York. The trepidation wasn't around sharing the experience with you lovely readers, but actually to relive the visit myself and put it into words. It was such a learning experience and was as fantastic as it was challenging. But let's start from the very beginning. Why did I go all the way to New York by myself?!

Now some may feel it's quite extreme to travel alone but actually it felt really natural to book up by myself. You know all about my first whirlwind visit to New York in 2015 as I wrote all about it, and it was such an unbelievable experience. The fact that I was actually living my dream was exciting enough, and when it was even more exciting than we had expected, it made it the trip of a life time! We blagged our way into so many exclusive clubs every single night, mingled with celebs, and saw the legendary sights from New Jersey to Coney Island to Brooklyn. It felt damn amazing to bounce down the sidewalk and totally feel the buzz of the city.

I've wanted that feeling ever since. Every other year I end up watching the SATC box sets and imagine myself as Carrie, dashing down the fictional East 73rd Street in $500 heels and a $5 vintage dress, dating the city. And I had the same feeling as I did in 2015. What am I working for? If I am able to jet to my dream destination, why am I not doing just that right now! There may not be  many other times in my life when I can head somewhere solo, and in early 2017 I started entertaining the thought of spending a few indulgent days in the city that offered so much. It actually appealed more to go alone and treat the trip exactly how I wanted, choosing to do just what I pleased. It felt like a personal challenge and almost like a pilgrimage. It also took some of the edge off a group trip as I could book things on a whim and selfishly plan obscure activities such as visiting the Glossier showroom, getting a blow dry or meeting friends.

Booking the flight was a fantastic feeling. I was on the way! I booked a hotel pretty quickly too as I had one in mind for years. On my last visit, we'd tried to get into the Standard Hotel but the reception said there was a "private party" on. The next night we realised that was just code for not letting any old person in and managed to blag our way in, but that day we literally walked onto the sidewalk and asked a passing group of hipsters if they new a nearby club. We were actually in West Village surrounded by them, but we were clueless tourists and after calling us the Spice Girls, the strangers sent us off to The Jane. A grand brick building on the edge of the Hudson river, we proceeded straight to the rooftop bar and tagged onto a group of British DJs to get past the doorman, before meeting some Wall Street bankers and being directed back to the club in the lobby. Dancing on plush arm chairs in front of grand fireplaces to '90s hip hop was a night to remember!

As I knew it was a hotel and I'd already been there, I felt a pull to the place, and it was one of the top rated hostel-style accommodation options. In New York you're looking at £150+ per night for a cheap hotel room and as it was just me footing the bill, I shelled out £500 for 6 nights at The Jane which meant a teeny room and shared bathrooms. The reviews said they were always spotless and the cabin inspired rooms seemed a safe and secure option for a lone traveller. I was concerned about long corridors in anonymous hotels so wanted somewhere that felt safe enough.

Next was my itinerary, and this step positively overwhelmed me. Planning to see the typical well-known sights is easy but I had already visited them all. I was looking for cool eateries, unique shops and fabulous neighbourhoods. I was actually hoping to catch the Travis Scott tour and coincidentally it did fall during my visit, but I had to weigh up the things I was brave enough to do on my own, and a crazy show pushed the mark. I made lists and lists of things to do, watched endless videos, and tried to group them into areas, but New York is so huge that it really is a challenge to figure out. I prebooked a few things, planned to see a few friends, and left the rest to my lists. I was spending time organising my trip around my own demanding job so I had to leave some decisions to nearer the actual time! Organising every tiny detail yourself means you can't drop the ball on anything, and it does take a lot of attention and care.

I had booked to go in April because during the start of the year, I always get itchy feet. Until spring properly flourishes, the winter months can be so dull and endless, which did mean I wasn't actually feeling super glam and my wardrobe felt a little sluggish. However I made a few purchases after trawling literally every online store I could think of and rammed my suitcase with options.

The night before travelling I remember sitting in bed thinking 'oh my gosh, I'm putting myself on a plane tomorrow and jetting away?!' It was a huge surge of nerves and excitement, and there were no friends to text last minute packing checklists to or ask who was bringing hair straighteners - I was all on my own. My flight was conveniently at 9am so I breezed through the airport in my own world, calmly waiting to board while making sure my eyes didn't leave the departure screens. There's none of the school-trip style comradery you have when you're travelling in a group of besties so that initial excitement is missing, and the flight was a pretty straightforward affair of reading, napping and movie guzzling. I felt a little like I was in a film too, flying mysteriously solo.

It was possible to fly direct from Birmingham to Newark, which meant a shuttle and train into Manhattan. It's a pretty naff airport so I did not feel any NYC glamour yet. When you're in a group you can faff at every turn but when solo, I trust my instincts and journey on, confidentially arriving to Penn Station even though there were some points I wasn't even sure I was on the right train, and jumping in a yellow cab to The Jane. I had finally arrived!

I can't quite say it was the warmest welcome - there were no fireworks apart from those popping in my head as I tried to make it sink in that I was on the other side of the world in the city that never sleeps. The Jane was oddly familiar and after a monosyllabic welcome at the reception, I was shown my room. Or rather, my broom cupboard as it shall now be referred to. 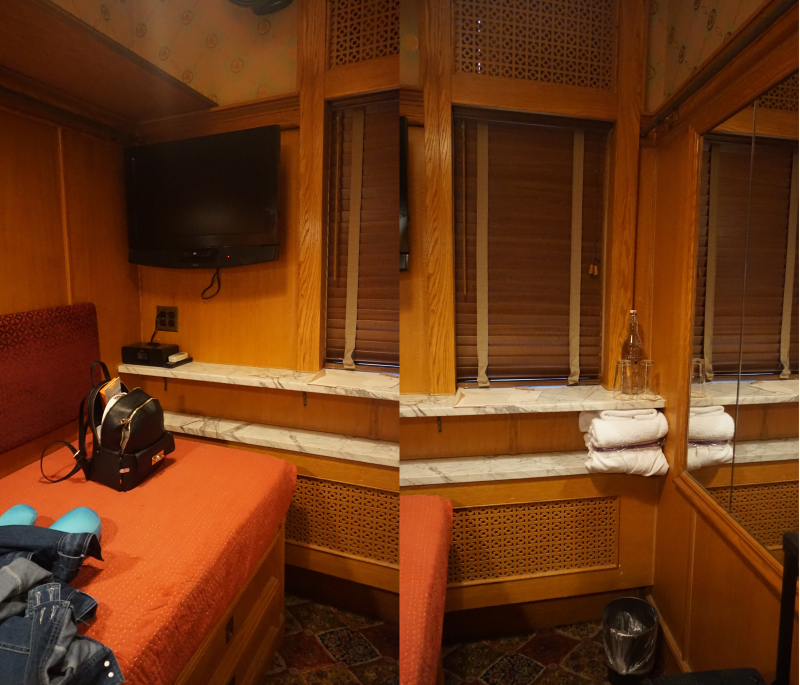 I did know that the rooms at The Jane are famous for being ship-style cabins, and I thought it would be rather novelty to have my little bunk, but it really was teeny! I tried to capture this in the photos above, as you can see the edge of the bed in both. The mirrored wall could not disguise that I could almost touch each wall with my arms outstretched, and despite there being decent storage under the bed for clothes and a suitcase, there was nowhere to actually be in this room. You were either sitting on the bed looking at the mirror, or lying horizontal on the bed asleep. The window was a stiff A4 sized shutter looking out onto another brick wall. It felt very closed in and was almost an effort to leave this tiny enclosure and burst out into such a huge city. The contrast did have a strange vibe and the hotel itself was very still and quiet. I ventured out towards the bathroom in the central corridors which indeed was always spotless, although the shower room was more of a huge, damp wet room; the kind where you don't quite want to touch anything!

It was around 7pm at home but still mid afternoon in the Big Apple, and my first plan was to head to Times Square and get some serious shopping done as long as I could stay awake. I originally booked a show for that evening but swapped the dates and I couldn't predict how tiring the journey would be, but I was raring to go! I quickly changed in my box room, took a few deep breaths, and walked all the way to Mid Town from West Village, taking in the hustle and bustle of the place. Wow!

It was grey, hectic and noisy as dusk set in, and I strutted the sidewalks as though it was most natural to be rubbing shoulders with the tourists and commuters heading home. I definitely dropped a few $$$ on Elizabeth and James perfume, face masks, lip masks, and Hourglass Ambient Lighting powder (which I dropped a few months later - gutted!). There's something about swinging that black and white striped bag that is so satisfying! 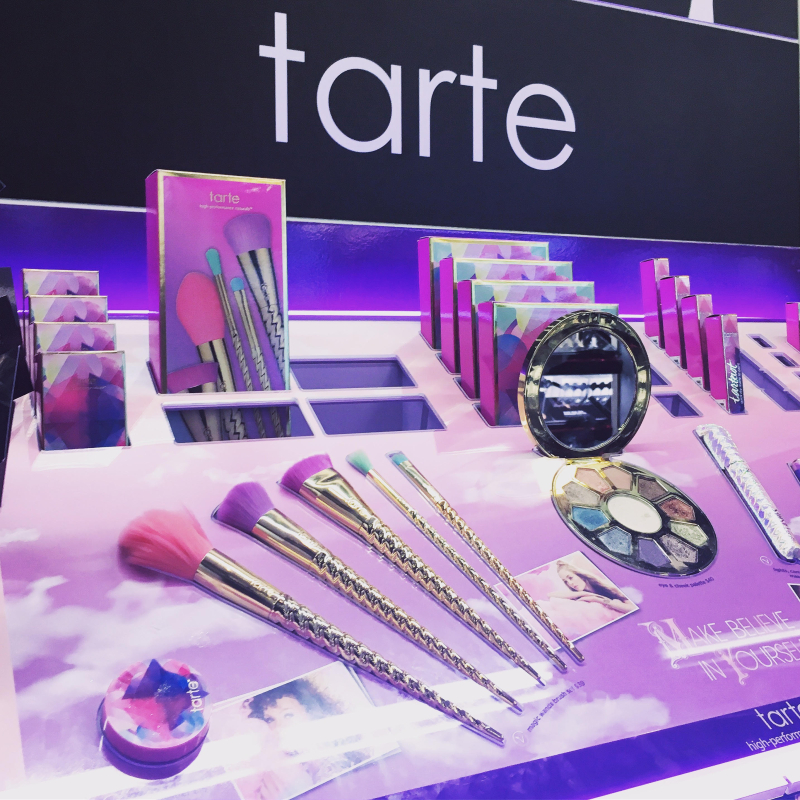 I also wondered all of the floors of the Forever21 and hit the beauty section of Duane Reed, though most of the shelves were empty. It was getting dark by then and the noise, car horns and bright lights were weighing down on my tired shoulders. I wasn't ready to face a sit down meal by myself just yet so I hit a deli, bought a delicious salmon Caesar salad and a huge slab of fluffy strawberry New York cheese cake, and hailed a cab back to my hotel. I ate in bed watching TV until as late as I could, but might I say American TV is so bizarre and not so pleasant! You could say British TV is similar as there were ad breaks every 5 minutes but the relentless commercials on various diseases, addiction hotlines and medical side effects were wild. Hindsight learning #1 was that I should have brought my laptop or ideally an iPad and caught up on YouTube or my favourite shows. I didn't really want to do the things I would be doing if I was sat at home, but actually that shouldn't matter while you are relaxing and refreshing yourself to take on the next day's adventures. See you next time for my first full day!