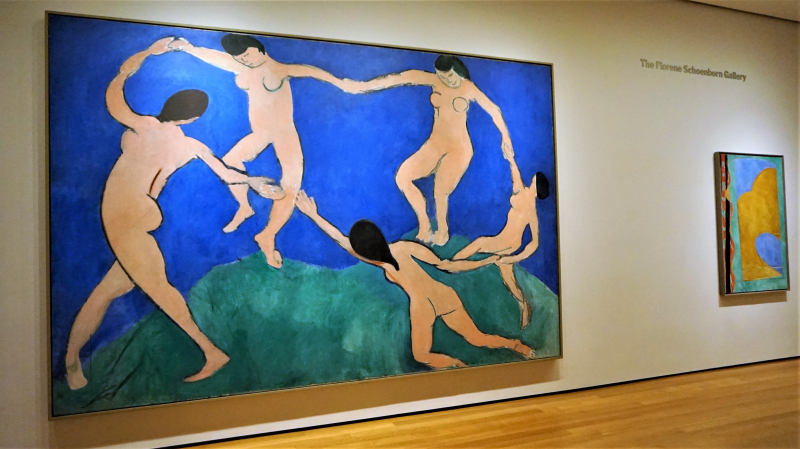 My second full day in NYC was damn HOT. Even at 9am on this Friday, the sun was beating down in a dangerous way and every step was tiring. I aimed to start out with a breakfast from nearby Chelsea Market but it was more chic than grab-n-go, so I continued on to the subway up towards the MoMA. A perfect way to spend the warmest portion of the day, I grabbed a ticket and started from the top! I watched a few rounds of a documentary before circling the levels. 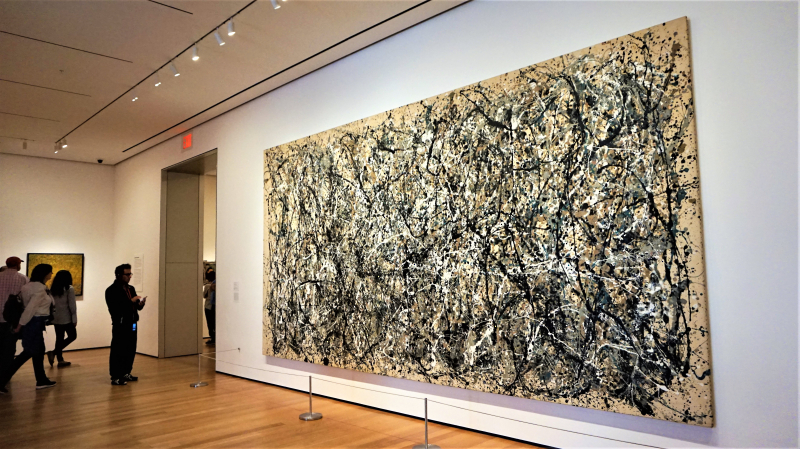 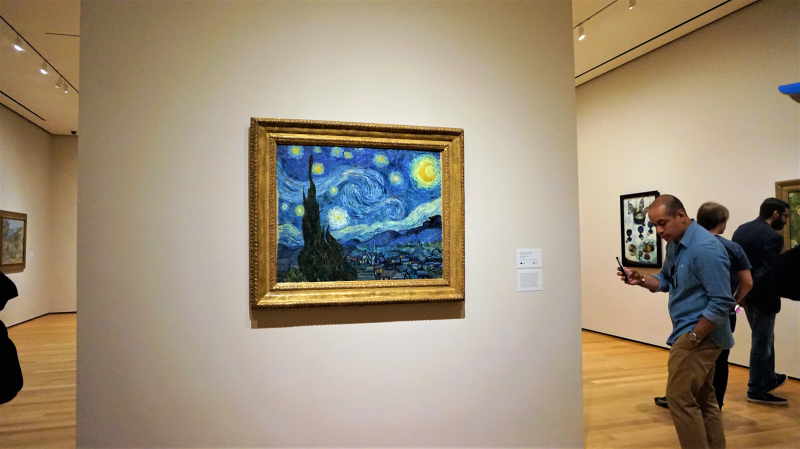 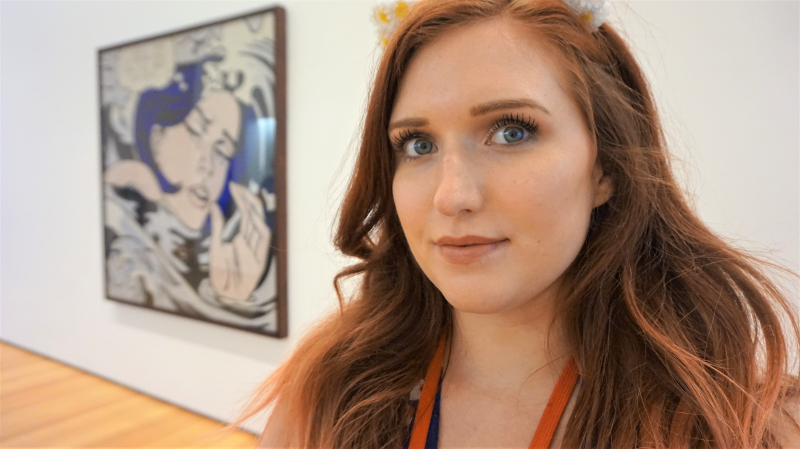 I asked another tourist for this photo, complete with audio guide and backpack! I wore this cute matching set from Motel, which I almost didn't bring as I wouldn't usually have a chance to wear anything like this, but it was ideal for the boiling day as I didn't even need to wear a bra. I also wore sunflower cat ears because, well, why not! My blow dry had fallen into loose waves so gladly I didn't have to worry about any frizz epidemics. 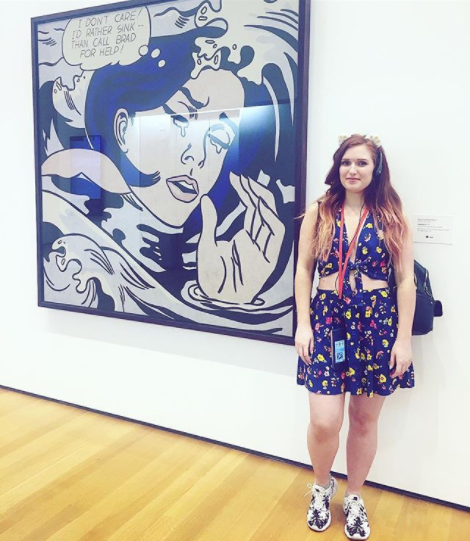 I have a few photos of this Lichtenstein because I painted this painting (sic) in school! The exhibition hadn't opened yet so it felt fateful this was on display. Also an old lady said I looked wonderful in the bathroom which made my day! A compliment from a chic New Yorker enjoying a day at the museum herself was so cool. 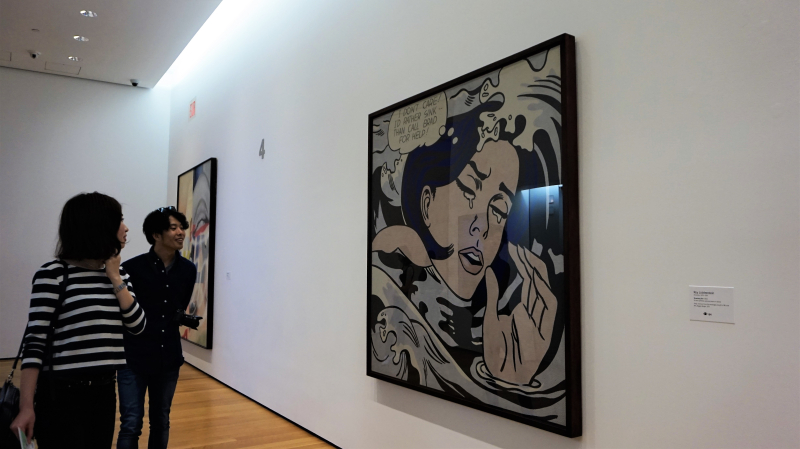 While I was uptown, I crossed off a few markers on my list, from the Cupcake ATM to a trip to Wholefoods. I slightly underestimated the walks between these places, as my goal was to stroll around as much as possible, but all of those blocks was actually a decent way to walk in the sunny, busy streets, although a model-esque guy did say 'hey beautiful' as he walked towards me and turned his head, which was so SATC. I was channeling Carrie hard! 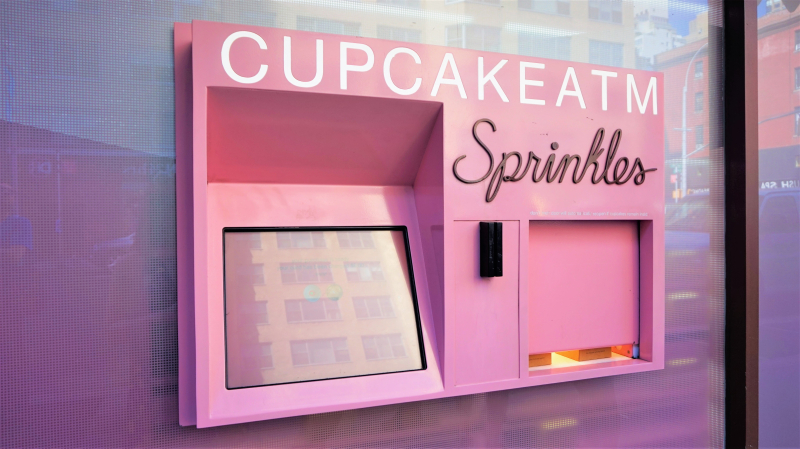 I took my Whole Foods lunch and headed into Central Park. It was crammed with moms, cyclists, groups of teens, snacking 20-somethings and a few solo people sitting against trees with headphones in. I could have ventured further but I was starving so I parked up on the nearest patch of grass and admired the views as I ate. 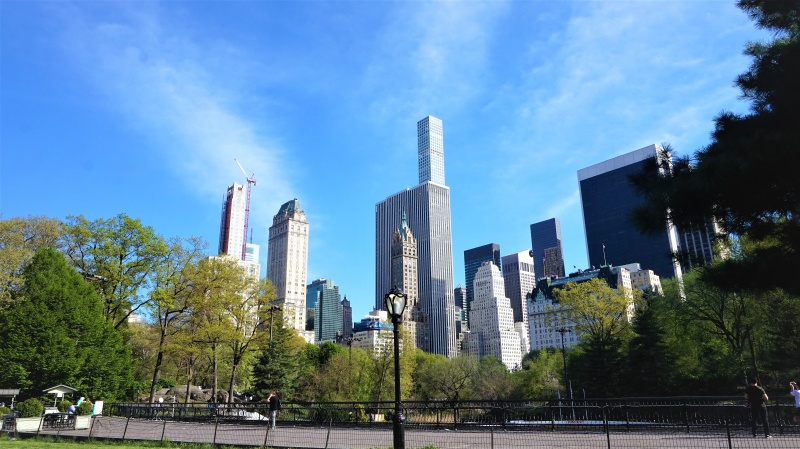 Soon it was mid-afternoon and time to head to Cha Cha Match in Chinatown to meet Erin of Spikes and Sequins! A babe on every level possible and (at the tme) a soon-to-be blushing bride, we met last time I was in New York as OG bloggers and internet pals. I hopped on a stuffy subway and we had a fabulous reunion as we cooled off and gossiped with her gorgeous BFF Kenia too. 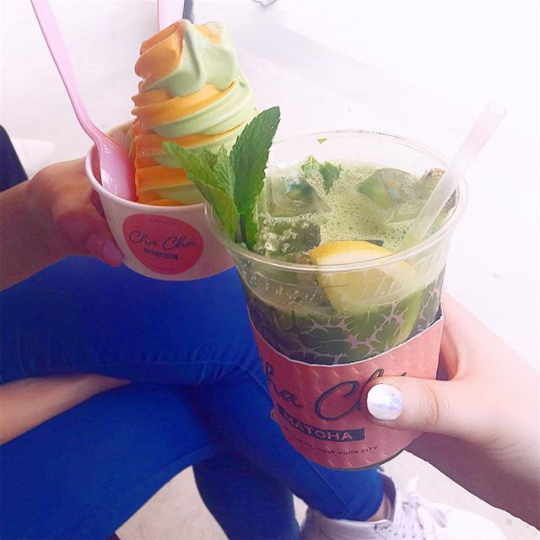 It was such a bright, buzzing afternoon that it seemed every New Yorker had burst from the office and was ready to soak up what was left of the day, taking advantage of the glorious weather. On impulse, we headed East for dinner in a Mexican place that I can't even remember now but lots of cocktails and wedding chat later took us right into the evening. It turned out the friend I had caught up with at The Jane was at a nearby bar called Flower Shop, so we jumped in the car and pulled up to a small bar with a secret downstairs layer for pool and rosé. Keeping in mind I hadn't been back to my hotel since the early morning but was invited to head onto another place, so as the girls bid goodbye to head out of Manhattan, I jumped into a cab with every intention to spruce up and come back out into the night.

Once in my hotel though, the tiredness literally hit. Jet lag and 12+ hours of walking and talking across town meant my cogs just slo w e d to a hault and I was cloaked in sleep. I suppose when you're in a group on holiday, you're constantly stopping for drinks and food and compromising against everyone's schedule, but being alone meant I was hauling myself all over the city until I literally dropped! Every ounce of me wanted to embrace this night but I couldn't even bring myself to start the cycle of getting ready all over again, so as annoyed as I was, I admitted defeat and called it a day as New York fizzed around me.